who The Sauk Centre Band Shell was built in 1931 for a cost of $3,000, including a cost overun of $25. They kept some old lumber from the previous band shell to use on the new band shell to not overun the cost estimate. This historic site has hosted hundreds of concerts and community events over the years, and is now again in need of a facelift and update. Band shells are being demolished throughout the state rather than being repaired. For nearly 10 years, local artist Roger Reinardy has had his eyes on the band shell in Sinclair Lewis Park. With his creativity, he originally had a vision of painting a historical theme of Sauk Centre, which was completed last summer on the corner of Main Street and Sinclair Lewis Ave. The success of that mural caused Reinardy to move one step further and converse with Pam Borgmann about the band shell idea again and how neat it would be to paint a mural. It wasn’t until this year that the idea turned into a project with a “we’re going to go for it” attitude. “I started playing around on the computer and created a musical-themed mural project which includes instruments and an LED lighting system,” Reinardy said.

A group quickly formed as this project called for collaboration amongst people with expertise in order to move forward.

Mike Weisser is project manager with the help of former park director, Bob Borgmann, and Sarah Holmquist as web designer, Paul Streitz for lighting design, Roger Reinardy as artist, and Pam Borgmann and Jim Umhofer are working with grant writing and finances. Over this past month, the group has gathered a list of the items which need attention, including prep work, repair of siding and stucco, painting the exterior, installing an equipment ramp/ lift and painting the mural, and installing the computerized LED lighting system, all of which totals approximately $63,000. The goal of the LED lighting system is broken up into three parts. “One: it needs to highlight the structure itself; two: highlight the artwork; and three: when someone’s performing, we have to be able to light them up,” Streitz said.

All of the work will be hired by local businesses in Sauk Centre.

In order to fund the project, the group is currently creating a GoFundMe page on Facebook where people can have a resource and see updates. They

Community members are working together to create a music-themed mural in the band shell in Sinclair Lewis Park which will include an LED lighting system. Painting of the mural will begin mid-June and should be completed by fall of 2017. 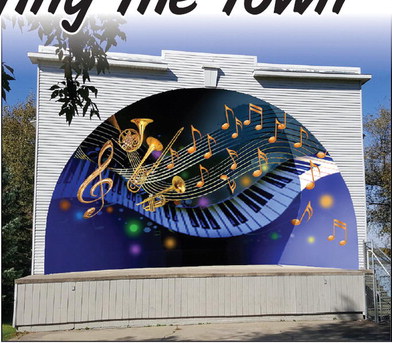 “Jim Umhofer and I are writing a grant to the Central Minnesota Arts Board, the Minnesota Historical Museum Preservation Fund and the Verizon Company,” Borgmann said.

The group feels having something so unique is going to call attention to the town.

Even though the structure works well for weeknight concerts, the feeling is a showpiece should be available and would actually give bands the desire to want to play there.

“I think right now it’s hard to get bands to play there because you can’t really set up lights and get equipment up on stage very easily,” Streitz said. “It’s a beautiful park, there’s plenty of space there and would support bringing in much bigger acts.”

“It gives us the opportunity with Paul’s idea of lighting that we can have bands, we can have plays there,” Borgmann said. “So, I think it encompasses the community of Sauk Centre and the demographics of this area.”

The group will start the renovation process in the spring of 2017. Preparation projects will include removing the chipped painting, high pressure washing and then sealing.

“Hopefully, Roger will be ready to paint by the middle of June,” Weisser said.

As the band shell is city property, the city will be in charge of maintaining the structure.

“We went to a city council meeting last week and they are pretty excited about the project,” Weisser said. “It’ll be years before it needs maintenance as far as the mural itself and lighting.”

“It’ll be a nice face lift for it,” Streitz added.

If anyone is interested in contributing, donations can be made to the Community Legacy Foundation (600 Main Street South) in Sauk Centre.

“I’d like to do one a year as long as I can do it,” Reinardy said. “Plug away at it and paint the town.”

If any business or individuals want to get involved in the project, please call Mike Weisser at 760-963-0352. 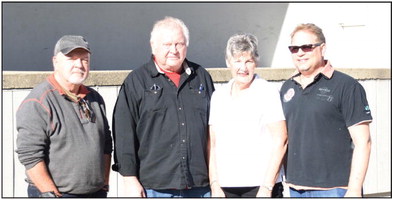 Roger Reinardy, Mike Weisser, Pam Borgmann and Paul Streitz stand in front of their upcoming mural project on the band shell in Sauk Centre. The renovation process will begin in the spring of 2017.

Click here to see this page in the eEdition: